If you’re living in any of the Gulf countries, then the wave of anti-Brazilian chicken is nothing new. The paranoia about the halal nature of imported poultry has become an outright hysteria that has led to many individuals to completely abstain from eating any Brazilian chicken including the famous Sadia brand. Those who are trusting enough to eat and buy Sadia chicken are accused of being lax with their halal diet and eating ‘haram’ products; and restaurants are quickly labelled as ‘haram’. I cannot count the times I’ve been in the presence of some zealot who is eager to preach religion to others and confirm their own commitment and meticulousness when it comes to eating halal. For they would never ever bring themselves to eat poultry from a non-Muslim country unlike those Godless Sadia eaters.  After all, what would some Brazilian ‘Kafir’ know about halal slaughtering  and are there even any Muslims in Brazil to begin with?

Then you’re bombarded with a hundred whatsapp pictures and messages from God knows where showing and for them ‘proving’, the incorrect slaughter of chickens in Brazil and the strong stance of scholars against Brazilian imported poultry. I admit that in the wake of this judgmental outburst, I too shied  away from these products for fear of being looked down upon as somehow ‘less religious’ then those who abstain from all  imported meats. But in my heart, I felt that the insinuation that thousands of devout Muslims were all comfortable with eating ‘dubious’ meat and chicken is an extremely arrogant, offensive and serious accusation. This led me to do some research on this topic from two angles.

Firstly, according to jurisprudence, as a Muslim eating in a Muslim country what is required of me.

Secondly, what is halal chicken doing in Brazil ans how trustworthy is their system.

These are my very humble findings:

Number one: It should be noted that this topic is not straightforward and there are certain differences between scholars, and indeed there are too many scholars to count for.  My research simply looked at Shiite jurisprudence and specifically the opinions of: Sayyed Mohammad Hussein Fadlalla, Sayyed Kamal al-Haydari and Sayyed Ali al-Sistani. And this is what I understood from all three:

1-Meat and chicken taken from another Muslim irrespective of sect is considered halal, and you are not requested to inspect it or ask about its source, even in doubt. It is halal unless you know for a fact that it doesn’t fulfill all the slaughtering requirements. Basically, it’s innocent until proven guilty. This includes restaurants and shops owned by Muslims in Muslim countries,  but also companies located in non-Muslim countries. So if a given slaughtering company in a non-Muslim country is monitored by Muslims who also do the slaughtering then the produce is halal.  Anything slaughtered by a non-Muslim is considered haram.

2-Meat and chicken taken that is imported is also halal if:

a) You are sure that it is halal and not a scam- this is vague and will differ according to the individual. However my understanding is that if you are confident in something’s halal status for whatever reasons you have, then it is halal. For example, you may trust the halal certificate as it is issued by a known certifying group  or you you may have any other reasons that are more or less ‘strict’.

b) The imported meat is sold or delivered by another Muslim. Muslims who provide the meats are the ones with the responsibility of making sure it’s halal.

So does Brazil Chicken meet these requirements? Well, after some research I come across an article discussing the story of halal chicken in Brazil and their system. The article was written in 2010 so not very recent but still gives a general idea of the history of halal meat exportation. These are the main points that should be noted.

1- According to to the director of CIBAL Halal,( halal certifying company in Brazil) Mohammed Hussein El Zoghbi, his Lebanese father, Hussein Mohammed El -Zoghbi was the first to introduce halal slaughtering to Brazil in the 1970s. He set off the exportation of halal chicken.

2- There are two monitoring companies- CIBAL and CDIAL. The latter was founded by Lebanese Ahmad Ali Saifi in 1984 and run today by his son Ali Ahmad Saifi.

3- Both certfiers have their own training centers which provide Muslim labor including technicians and slaughterers and religious supervisors.

4- Their facilities are designed to be positioned towards Mecca and especially sharpened knives are provided by the certifiers.

5-They have diplomatic commissions from various Muslim countries including Iran who inspect their facilities.

If we are to take this information to be true, then the halal slaughtering in Brazil is conducted by Muslims and would therefore qualify as halal. 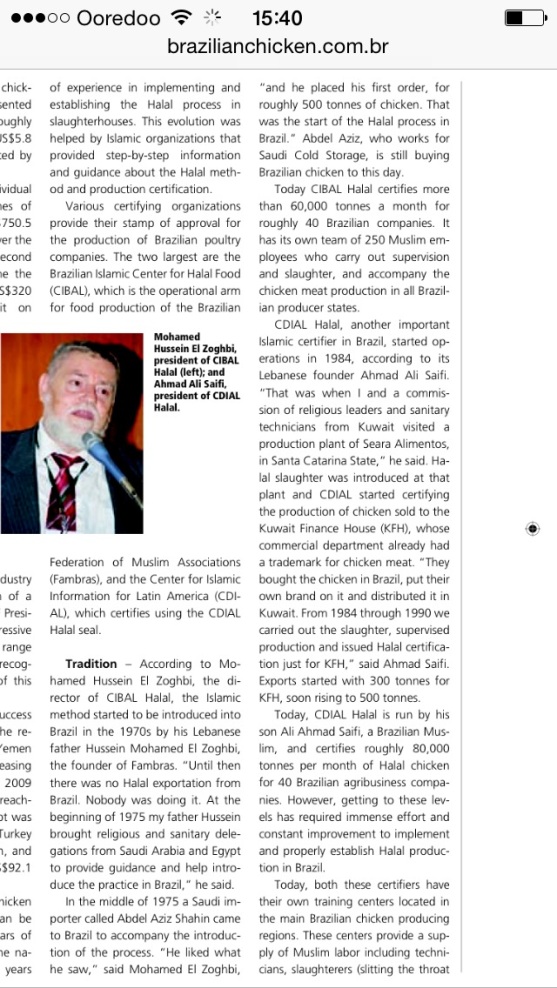 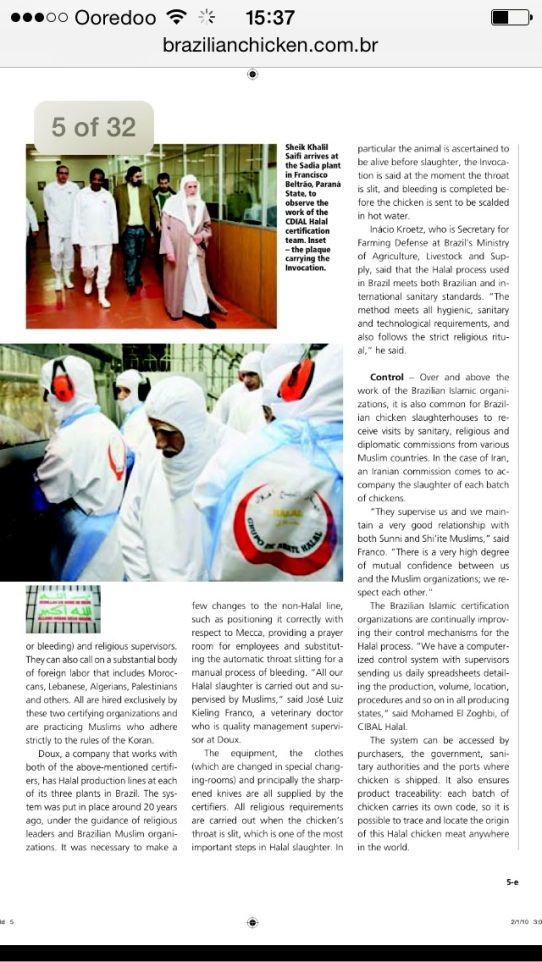 A Matter of Trust

There are many who have told me that although they don’t look down on imported meat. They feel more comfortable sticking to local produce and trust them more. This is a fair enough point and everyone has the right to eat the food that they feel is best for them. But there are some underlying problems with this stance:

1- Without  research, on what basis is a local butcher more trustworthy than a big company?

2- A small butcher only needs one or two corrupt individuals to produce ‘dubious’ meat and chicken. Whereas its harder to get away with things in big companies especially as they are constantly monitored. You would need corruption on an industrial scale to produce huge amounts of fake halal meat. It would also mean that all the Muslim countries who import Brazilian meat are turning a blind eye to the fact that the meat is not halal and corrupt themselves. This is not impossible, but seems in my eyes unlikely and not in the interest of any company who thinks in long terms.

3- Viewing halal meat from non-Muslim countries as less trustworthy suggests in a way that Muslims in the Islamic world are more religious and ‘careful’ with slaughtering than Westernized Muslims; which is untrue and insulting. As a British Muslim myself I find this very hard to accept.

3 thoughts on “I do NOT eat haram chicken”